Who is the Kosher Pig? 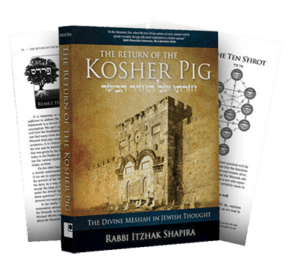 Over the last 2000 years, there has not been a single name that is more offensive to the Jewish people than the name of Yeshua/Jesus. As a matter of fact, the name is so offensive that the letter ע was dropped from his name to make the word יש”ו (may his name be blotted out.)

What makes his figure as the Messiah so much different than the various false Messiahs over the last 2000 years? In the introduction to the book, we read:

“I am sure that some of you who read the title of the book raised an eyebrow or two. Who is the Kosher Pig and why will he return? I can assure you today that the title The Return of the Kosher Pig does not involve any type of marketing gimmick of any sort to sell more copies! Before getting upset about the title of the book, I would like to briefly explain the important term “Kosher Pig” as it is an important premise for the rest of the book. The pig, or Cahzir (חזיר) in Hebrew, represents the symbol of uncleanness to the Jew” Yeshua of Natzeret is the only one who claimed to be divine in nature with the full authority to even forgive sins. Modern Judaism, that is built on 13 articles of faith clearly rejects the idea that G-D can take a form of a man. Yeshua because of his claims is considered unclean to the Jewish people. Amazing, some of the Rabbis declared that the pig will return during the days of Messiah and will become Kosher as he reveals his true nature. The Return of the Kosher Pig attempts to bring back the unkosher Yeshua to the Jewish people by presenting the case for the divine Messiah.”

Far from a study of kosher dietary laws, this book is an unprecedented journey toward the true identity of the Divine Messiah the one previously considered unkosher and unacceptable by Jewish people. This encyclopedic volume will surprise and challenge you with the compelling words of Jewish sages and rabbis over the last 2,000 years, many in English for the first time.